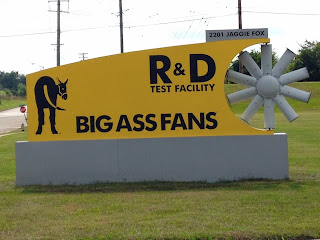 For those of you who are not familiar with the company "Big Ass Fans" I promise I am not being crude it really is the name of a company making very large, very efficient ceiling fans. Originally they were named "HVLS fans" for "high volume low speed fans", but that name was not super interesting and their customers kept asking for "Big Ass Fans" and the name finally took, I mean what else do you call a 24 foot ceiling fan right? That's right, they make fans as wide as 24 feet, that can condition areas as big as an airplane hanger! The company based in Lexington KY has been making their commercial fans for over a decade and last year they brought on their residential line named "Haiku". 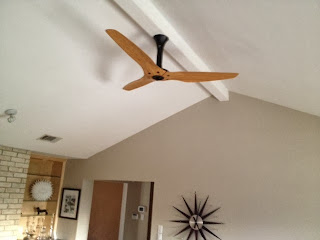 The Haiku is a game changer in the world of indoor comfort and efficiency. This fan moves a high volume of air, is whisper quiet and it can use as little as 3 WATTS! What's more is even at it's higher speed it is only using 30 WATTS, compared to as much as 250 watts by other fans this is a major improvement in energy efficiency. It's not often to find a product that so greatly improves its field and looks this good. I have to say I want one!!
The Haiku has huge potential for high performance homes or even passive house projects that need little to no mechanical heating and cooling much of the year. Even in standard construction the Haiku can help extend the shoulder months by lowering the perceived temperature by as much as 5 degrees. If you are a designer , HVAC contractor or even a homeowner designing your own high performance home you really should look a Haiku fan.﻿
﻿ 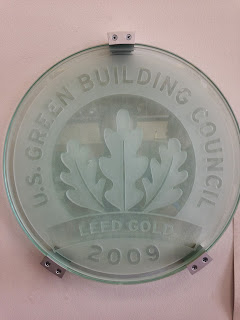 Today I had the pleasure of touring their state of the art LEED Gold certified office building and the adjoining R & D lab. I was very impressed at how open the office space was and a general feeling that the employees were happy and engaged with their jobs. We are fortunate to have such a good corporate citizen right here in Lexington!
Make sure to stop by the Big Ass Fans booth at this years Midwest Residential Energy Conference or you can visit their website at http://www.haikufan.com/